Most, if not all of us, have a fascination when it comes to space and the possibility of alien life. Anytime we hear in the news or internet of a possible UFO being spotted, or NASA covering up a UFO on one of their live streams, it peaks our interest just a little bit more.

Recently, there has been an interesting statement made by Dr. Ken Johnston Sr. Dr. Johnston was a consultant for Brown and Root in the Lunar Receiving Laboratory, of the NASA Johnson Center in 1971. During this time, he was involved in storing and cataloging Apollo images and also moon rocks. Dr. Johnston claims this was when he allegedly saw NASA photos that had anomalies or UFO in the Apollo photos. 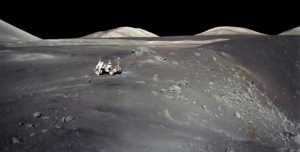 Unfortunately, during this time as mission photos were pouring in with these so called UFOs and anomalies, Dr. Johnston was witnessing technicians being told to edit them out by painting out the details. These claims were brought to light as Dr. Johnston was donating photographs and other materials to Roswell’s international UFO Museum and Research Center. 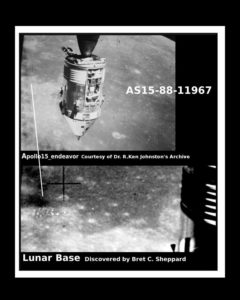 One of the most shocking claims made by Dr. Johnston was that he was ordered by senior NASA officials to destroy full sets of these photographs. Fortunately, Dr. Johnston was able to hold onto some of these images that show evidence of unexplained objects and even building/structures on the Moon. 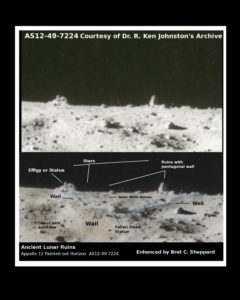 (Visited 190 times, 1 visits today)
Share this with your friends!

Are There UFOs On The Moon?