‘Angel In The Sky’ Spotted By Texas Man

Sometimes in life, we have a lot going on and need that extra motivation to get us through.  This is exactly what happened to Danny Ferraro of Texas.

Ferraro was recently driving on Highway 105 when to his amazement he spotted what appeared to be an “angel” formed in the clouds.  Ferraro didn’t hesitate, he knew it could be gone in seconds so he grabbed his phone and took the picture seen below. 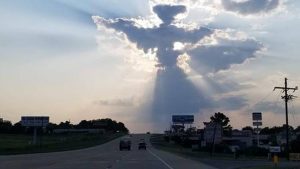 “It lasted for just a few moments, but I grabbed my phone and the first picture I took was spectacular,”  Ferraro, 57, told InsideEdition.com.

According to Ferraro, he and his wife have been going through some family struggles since being married in June but the angelic cloud formation came right at the right time.  Ferraro and his wife were on their way to deal with more family issues as the figure appeared to give them a sense of hope and peace.

“I immediately noticed the cloud formation and the brilliant rays straight ahead of us…,”  Ferraro said.  “We both saw the angel and felt it meant that everything will be OK.  I just felt like God was saying, I’m always with you.”

Ferraro shared the image on his Facebook Page, which is where it went viral.

“I feel very honored and blessed to have captured this moment,” he said.

Is This Kinect Anomaly A Ghost?