The Connection Between Halloween And The Paranormal

Once October hits, it ends up being none stop memes and articles about Halloween and how we can’t wait to dress up and be ridiculous.  Well, according to some, there is more to Halloween which includes a close connection to the spirit world.  For most of us who are involved or interested in the paranormal, we look at Halloween as a time that we focus more on the other side and the connection with the dead.  Some may say the connection is the strongest during this month because so many of us are focused more on communicating with the dead more so than any other time.  This surge in interest is what is said to spike the activity with the other side. 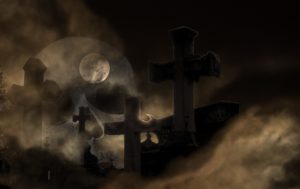 It kind of makes some sense if you think about it.  The more energy and interest we put into the paranormal and communicating with the other side, builds up an energy and momentum to help power up the spirits communicate easier with the living.  This is why many claim that there is a spike in paranormal activity during October and the days surrounding Halloween.  Although, I would take this information with a grain of salt.

How do we really know this is the case?  We don’t!  Plain and simple right?  But listen, it is an interesting theory and why not test it out?  This Halloween after you are done with the parties, candy and carving pumpkins, try and set up an investigation or some experiments to try and connect with the other side!

The History of Paranormal TV… According to Us