Dale Earnhardt Jr. Believes In The Paranormal But Not Bigfoot

Although he might not be a believer in Bigfoot or Sasquatch, Dale Earnhardt Jr. does believe in some paranormal activity or ghosts.

Recently, during his weekly podcast ‘Dale Jr. Download’, fans were able to ask Dale Earnhardt Jr. questions involving paranormal activity.  During the podcast, he shared an experience he had in a bad accident where his car caught on fire.

In 2004 at Sonoma Raceway, Earnhardt was driving a Corvette in a sports car event when he was involved in a crash and his car burst into flames.  Thankfully, Earnhardt was okay after the crash and the video shows he was alone during the horrific ordeal but he claims to have felt someone or something pulled him out of the wreck.

Earnhardt went on to say on his podcast, “When I wrecked in the Corvette in 2004 at Sonoma – it caught fire – somebody pulled me out of that car.  And I thought that it was a corner worker because I felt somebody put their hands under my armpits and pull me out of the car.  I didn’t get out.  I don’t have any memory of myself climbing out of the car.  And I remember sort of moving like in motion going to lean forward and try to climb out of the car, and then something grabbed me under the armpits, pulled me up over the door bars and then let go of me.

“And I fell to the ground, and there’s pictures of me laying on the ground next to the car.  I know that when I got to the hospital I was like, ‘Who pulled me out of the car?  I gotta say thanks to this person,’ because it was a hand!  It was physical hands grabbing me!  I felt it.  And there was nobody there.”

Aside from being convinced he felt hands helping him get out of that car, he is also confident that Bigfoot does not exist.  “I think that it’s fun to daydream or have TV shows and all those things.  It’s fun to imagine.  It’s fun to let the imagination go, and sometimes I’m as guilty as everybody of watching TV shows that are looking for Sasquatch.  I don’t know what that means, but I don’t think he’s ou there, but I’ll watch the shows.”

(Visited 491 times, 1 visits today)
Share this with your friends! 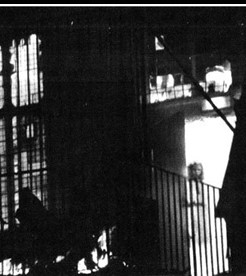