Rebecca Palmer and her husband Sean Reynolds recently claimed to have experienced some serious negative energy while investigating a 300-year old country house. The couple was filming for their paranormal investigation series, Ghost Dimensions when Rebecca began to feel ill. Nausea led to more intense sensations such as burning in her eyes. In an attempt to defend herself from the negative energy she is given a “protective crystal bracelet” which to our surprise elicited a possible response from the other side. Upon putting on the bracelet, an audible growl is captured by their cameras and is heard in real time by Rebecca and Sean.

After the experience, Rebecca said: “I got this horrible feeling as soon as we went into the building and as we climbed the stairs it was getting worse and worse.

“I had a knot in my stomach and felt really sick. At one point my eyes even started burning, and I felt this pressure on my neck like something was trying to push me out.

“I was really scared. I have never felt anything like it. I remember even telling Sean that if it got any worse, I was going to have to leave.

“I genuinely feared for my safety. I could tell there was some kind of negative presence around and I was worried it would try to take hold of me.

“I said a little prayer for protection and I was so relieved when Andy, our cameraman, said he had some crystals I could wear.

“As soon as I put them on my wrist there was this awful sound like a demonic growl – growling is never a good sign in my opinion.

“When I first heard it I thought I’m out of here, I was close to quitting. I was really terrifying.

“This evil spirit was obviously not happy at all that I was trying to protect myself.

“It was only myself and our camera lady Jane who were being targeted by the ghost. It clearly had an issue with women.

“As we got into the basement Jane wasn’t well at all. She turned white as a sheet, and she was sick. She had to get out of there.

“With the hall having been used as a meeting place for the Freemasons for so long, I’m sure the spirit making us suffer was that of a mason.

“Women aren’t allowed in the Freemasons, so I think this presence was trying to uphold those rules. And he was willing to use any method to get us out of there.” 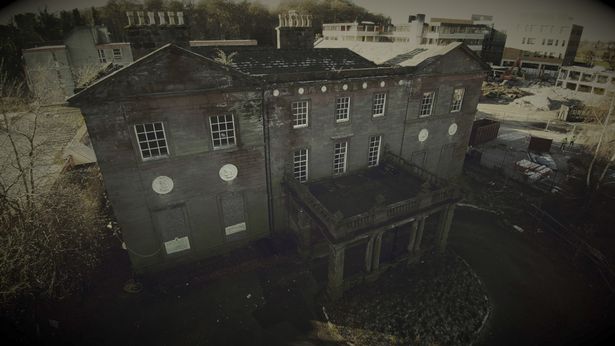 The 300-year old location did house meetings of the Freemasons along with housing a bunch of notable people such as the Earl of Sefton, shipowner Frederick Richard Leylands indeed. The home also had a role as a hospital during WWII and is not kept restored as a historic location. With such a history, it is not surprising to hear tales of paranormal activities coming from the halls of the 300-year-old building.