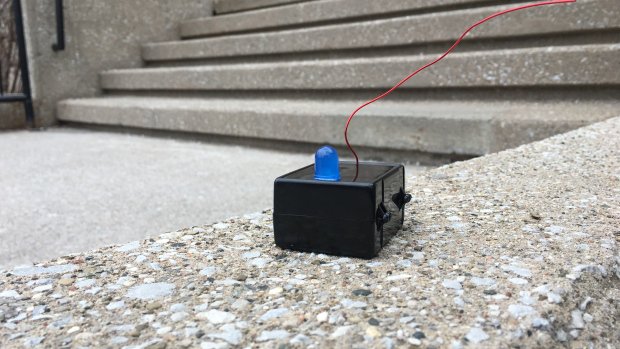 Having been thrust into the world of paranormal research for over a decade it is hard to remember that to the outside world our small microcosm is greatly misunderstood. With most thinking we are trapping ghosts with proton packs, the look of our experimental equipment is for the most part unknown. That being said it is of little surprise when someone discovered the ghost hunting equipment and called in a bomb scare.

“It was not intentionally done. It was just forgetfulness.”

Left behind by the Listow Paranormal Society the electromagnetic field meter triggered a serious bomb scare at the 150-year-old Historic Ontario Mackenzie Hall. Looking understandably suspicious the small black box displaying a red wire and light does look like an explosive device straight out of James Bond.

The Windsor police bomb squad destroyed a mysterious black box with a red wire and little blue light on Tuesday. It turned out to be a ghost-hunting device accidentally left behind by the Listowel Paranormal Society. https://t.co/DR84gW2l4m via @CBCWindsor pic.twitter.com/vbPzOHig5y

Buzzfeed interviewed Jen Parker, Listowel Paranormal Societies assistant director. “Our intention was strictly to go in, do our investigation, get some evidence for our viewers on Facebook and YouTube and call it a night. I apologize to anybody who was affected by this. It was not intentionally done. It was just forgetfulness.”