Ghost Kid? We Have Our Doubts…

Lately, we have noticed a trend in potential photos featuring was appears to be a ghost or apparition behind people while taking family photographs.  These photos have been going viral recently, but we have our doubts about their authenticity.

Recently, Laura Watson was having a picnic with her family in Plessey Woods Country Park in the UK.  As they were enjoying the day, the kids, Charlotte Hill, Byrin Watson and Jack decided to have some fun and climb a tree.  Laura took this opportunity to snap some pictures of the kids.

After snapping some pictures, Laura was stunned and terrified to see what appears to be a boy standing behind Byrin! 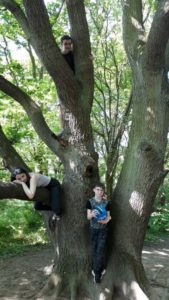 “It’s very unusual, and everyone is freaked out.  Me and my daughter couldn’t even go to sleep last night because we were so scared,” Laura said.

“My husband is on night shifts, and I was along, and I was like ‘oh God.’  I was terrified in case anything had followed us back.

I’ve had people on our Facebook saying they are going to send me prayers.”

Laura claims there was no one else behind the tree and now has a new view on the paranormal.

“I didn’t believe in anything like that until I saw this for myself.”

“It looks like a child to me.  I don’t know if it’s a girl or a boy.  But I can see this face, and it looks like the hand is on my son’s shoulder, which is very bizarre.” 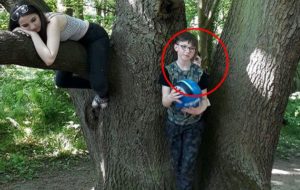 Many people Laura might have photoshopped the picture, but she claims she took it on her phone and is in no way good with technology to even begin to fake something like this.

Laura was also quoted in saying, “I don’t know much about the history of the woods, but some people are saying that many moons ago a young boy drowned in the river.  You don’t know if it’s just hearsay.”