It’s the summertime and who doesn’t mind hanging out by the beach and watching the waves roll in?

A couple vacationing in Cherry Grove, SC was doing just that when they believed they captured what seems to be a ‘ghostly apparition’ on a pier nearby.  Johnny Cobb and his girlfriend April Walker were staying at the Sea Cabin and enjoying a quiet night on their balcony.  They wanted to capture the moment and decided to take pictures of the waves crashing on the coast.

After taking the pictures, Cobb looked back to see how they came out and to his astonishment, he believes he caught something unusual.  A ‘ghostly apparition’ walking the pier. 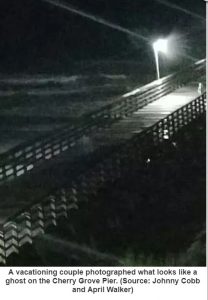 Cobb and his girlfriend decided to show the picture to others to get their opinion.  According to the couple, some say it looks like the spirit of a girl, others think it looks like a pirate. 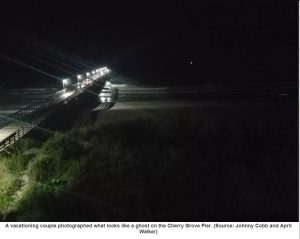 According to legend, a well-known pirate named Blackbeard had said to have visited the northern part of the Grand Strand seeking safe harbor and a hiding spot.  Maybe that was him, still looking for that hiding spot…