HalloScream At The Olde Park Hotel

GRAB YOUR TICKETS TO HALLOSCREAM HERE

One of our most popular livestream location, The Olde Park Hotel Ballinger, is known for its paranormal activity. From unexplained sounds to EVP the old structure seems to house more than just a robust history. Having its doors open to the public for paranormal investigations, The Olde Park Hotel has been chilling people to the bone on a nightly basis. While the idea of real ghosts is chilling the hotel goes through a transformation for everyone’s favorite time of the year, Halloween. 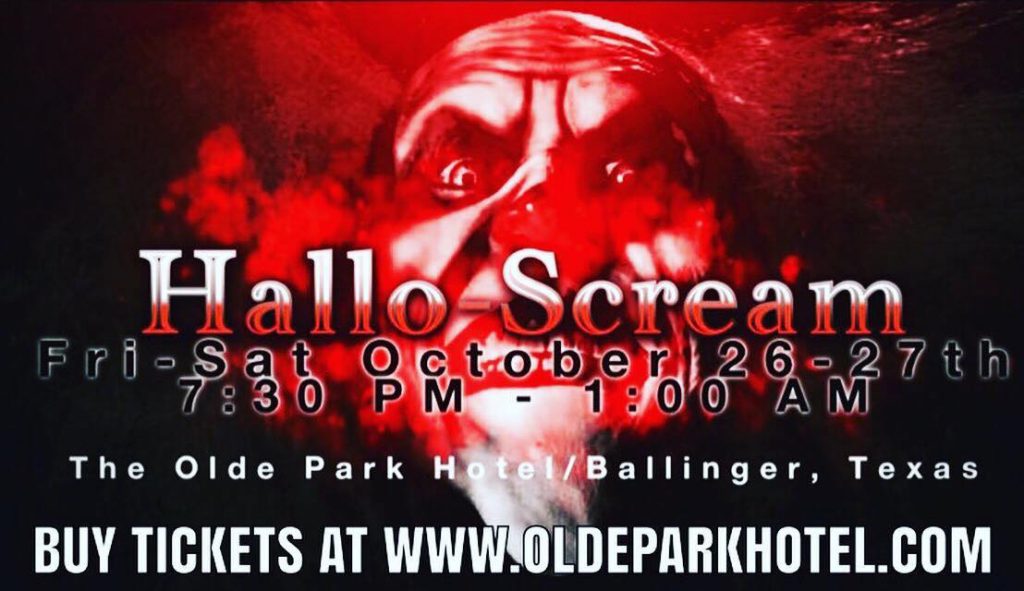 Other very notorious Old West Bandits like Emmanuel Clements Sr., John Wesley Hardin, and Killin’ Jim Miller, have passed through Ballinger and the doors of this hotel as well and did quite possibly stay in the hotel.

It is STRONGLY believed that the spirits of Killin’ Jim Miller and Emmanuel Clements Sr do STILL roam the hallways of this circa 1886 West Texas hotel deep into the night. You see Killin’ Jim Miller met quite a demise quite as most notorious outlaws did. When the rope was put around his neck, he himself in the end said…..LET HER RIP!
It is believed that as many as 30 spirits from the past STILL ARE HERE in the old hotel structure to show themselves to people looking for a night of strong and sometimes extreme paranormal activity. One thing the spirits like to do to our overnight guests at around 4 am in this hotel is walk the hallways (the ghostly sounds of loud cowboy boots/with spurs on) loudly stopping at guests doors…..and then sometime jiggling the old doorknobs and even sometimes opening the actual doors to the shock of our guests.
You see, this circa 1886 10,000 sq ft historical West Texas hotel circa is unique in its own story. It is one of the oldest buildings in Ballinger, Texas. TAKE A STEP back into Old Texas Wild West with extraordinary haunting experiences that you will never forget. Hotel purchased by experienced paranormal researchers (Dan & Connie LaFave – Graveyard Shift Paranormal Investigations) in July 2016 and they have been actively restoring the hotel and sharing it with people and paranormal teams across Texas. Hotel is available for reservation/booking of evening history/ghost tours, weekend overnight group paranormal investigations/stays, and special events. There have been many online articles done on the ghosts of this hotel as well as being on the news several times. To find out more information, simply Google the hotel name. All pricing info, payments to be made, and any inquiries can be submitted through the official hotel website located at www.oldeparkhotel.com