THIS TOPIC WAS FEATURED ON THE ECTOPLASM SHOW

Click Here For All Episode Of The Ectoplasm Show

I am pretty sure most people surfing the internet on a regular basis have at one time or another crossed passed the YouTube event horizon. That time when hours seem to slip by as we watch recommended video after recommended video. During my recent visit to the matrix I came across a video featuring Neil deGrasse Tyson (My Man). Neil was touching on one of those topics that I often consider while contemplating the cosmos. This topic is “How would aliens treat us if they showed up”? 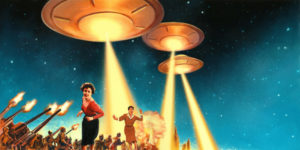 I go back and forth between the two options of “awesome they are here to accept us into the galactic federation” or “we eat people so”. While listening to Neil I was reminded that unfortunately, the less appealing option is a definite possibility. I was reminded how in retrospect we are still in our early infancy of space travel. Our space station, if looking at a globe on your desk, would only float an eight of a inch above the globe. This cannot even be compared to an alien species with the capabilities of traveling from star system to star system. Neil compares this to our experience when we look at a worm on the street. We cannot connect to the worm on an relate-able level because we are so much more advanced than the worm. If an alien species were to view us as the worm, what is truly stopping them from “stepping on us” besides their own compassion.