Yeah, you read that correctly… A man by the name of Christian J. Devaux, 25, was arrested recently after a motor vehicle stop because he had a warrant out for his arrest.  He was charged with illegal discharge of a firearm, making a false statement to police, second-degree reckless endangerment, misusing an emergency call, and disorderly conduct.

It gets better though…

According to Journal Inquirer, Devaux called 911 in the early morning of July 26th.  At the time, Devaux was claiming that a man wearing a hooded sweatshirt and a mask and holding a rifle broke into his house.  During the 911 call, you can hear Devaux yelling “HEY!” and eventually firing two shots at the apparent intruder according to troopers.

When investigators arrived at Devaux’s home, they found no evidence of a break-in or any evidence of the man that Devaux described over the phone.

There was also issues with Devaux’s statement according to troopers, where he described firing the two shots as a warning but intentionally over the intruder’s head.  Investigators found that scenario was very unlikely, seeing how a ballistic analysis showed that the two bullets had punctured a wall in the home that was less than three feet off the floor. 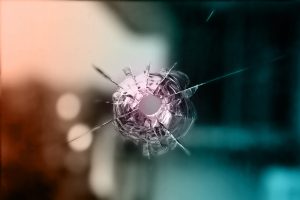 Eventually, while being interviewed by troopers, he told them “there are some things he just can’t explain, like seeing ghosts.”

He later told state police that he has been a paranormal investigator for five to six years and recently encountered an apparition at the former Mansfield Training School and Hospital. He continued by saying that while he did not want to be considered “insane”, he does believe that the intruder possibly was of supernatural origin.

According to state police, Devaux has made similar claims in the past about a phantom home invader back in 2011.

Devaux was later released on $5,000 bond and will appear in court on September 11th.