What could be more innocent & cheerful than hearing a child’s nursery rhyme?  It’s sweet, playful, nothing to fear… until you hear it in a dead girl’s room and there’s no one else around.

THAT is exactly what happened to me one night in November on my very first ghost hunt!

Ever since I was a little girl, I’ve always believed there was “something” out there, something more, something I couldn’t quite put my finger on. But being neither religious nor spiritual, I really didn’t have anything to base my feelings off of.  Yet, through the years, little things started to happen that I just couldn’t quite ignore.  You’ve all heard about déjà vu, I’m sure. Well, mine is on another level… not to mention the amazingly vivid and accurate dreams I have.  OR the psychics that have told me I’m an “angelic being” with extremely strong spiritual gifts. But THAT alone doesn’t make me psychic or a medium or spiritual, or does it?! This is a question I’m starting to ask myself more and more these days… do I have a connection to spirit? Over the last 5 months, I’ve become somewhat entranced by this idea of connecting with the world of spirit or the “something more,” that I now can honestly say, I do believe is out there.  I’ve even gone as far as to become an intuitive Reiki healer and hope to become a master and teacher in the very near future.  I’ve gone from thinking meditation is a strange, “hippie thing,” to loving the practice of it, and I regularly perform automatic writing and journaling in order to strengthen my connection to the other side.

All this to say, yes, I now believe I have a strong connection to spirit, and I believe that is what led me to the Malvern Manor. The “Manor” as I’ve become accustomed to calling it is well known to many in the paranormal community.  It’s been featured on shows like “Paranormal Lockdown,” been researched by many ghost enthusiasts, and is in the possession of top paranormal experts, Josh Heard & Potter.  I was even lucky enough to visit it under the guidance of “Paranormal State’s” Ryan Buell as I tagged along with Paranormal Warehouse to live-stream a three-day long event.

On the first day of our arrival at Malvern Manor, I was hooked!  Upon entering the old, dilapidated building; you could feel an eeriness that exudes from the walls. You just KNOW there is something there.  But me, being a newbie in this arena I sat back (for a short while) and just listened to the stories and events that have taken place. I learned about The Shadow Man who runs at you from a room in a back hall.  I tested the theories about Hank or Henry, putting on his pajamas and waiting for him to make a ruckus (he hates women, especially when they mess with his belongings), I even sat with the famous Captain whose room leads out to the “bloody hallway,” hoping to get a sign that he was with me.  But unfortunately, none of these spirits came to me. They weren’t who I was there to “see!”

At the end of the bloodstained walls outside The Captain’s room, there is a room where one of the more tragic spirits resides.  Inez May Gibson. Inez was born August 6, 1888.  She came from a split family, with neither of her parents truly wanting to raise her or her little brother Otto, so she and her brother were adopted by her aunt and uncle. They were prominent Malvern citizens and at one point, it is said they owned Malvern Manor. One day, rumors have it, Inez received a letter from her mother stating that she would soon come to pick her up and care for her once again.  This upset Inez greatly.  She mentioned she would rather die than go live with her mother.  And that is exactly what happened.

On December 21, 1900, Inez’s brother Otto happened upon his sister Inez, hanging by a jump rope in her closet.  She was only 12-years-old. Records state that Inez committed suicide.  But after my experience at the Manor, I believe otherwise! From night one, I was strangely drawn to Inez’s room.  Every time I ventured elsewhere in the house, it kept pulling me back.  And on that very first night, something incredible happened; I heard a song.

As I hung out in poor Inez’s room, the constant loop of those lyrics could not escape my head.  I turned to the guys with me and asked, “Do you hear that?” Of course, it was only me who heard this tune… and it was creepy. The next day, I decided to test my theory, see if hearing that song was a spirit, mainly Inez’s spirit, trying to communicate with me.  So I downloaded multiple versions of the song and ventured back up to Inez’s toy-filled room with the guys from Paranormal Warehouse.

Down the bloody hallway, and back in Inez’s room, I started to play a version of the song while we all listened.  I tried changing the song to a new version, but my phone wouldn’t budge.  I did this over and over again, and yet the same song kept playing.  Strange, maybe I had a bad connection?  But, I had previously been able to scroll through my different options while in the house… so maybe it was something more.  Maybe she just liked this version.

But for now, it was time to get back to work, so we left the room, promising to come back later and investigate more. That evening, as we began to live stream the action throughout Malvern Manor, the three of us ventured back into Inez’s room.  This time, we decided to go live from her room ourselves.  Like I said, I’m new to this whole ghost investigation thing, so I sat back and let Paranormal Warehouse do the talking…but over and over again, all the viewers to our live stream continued to comment, that they felt Inez’s spirit, she was scared, and wanted to talk to ME, alone.  Needless to say, this scared me even more, especially when my friend, who is a very strong medium, and was watching, confirmed what everyone else had been saying.  Inez, or whoever was there in spirit, wanted to talk to ME, ALONE!  “Pat-a-cake” was her way of proving that I could hear her.

Great!  The one thing I had asked was to never be left alone in the Manor! I didn’t have the guts to sit solo in Inez’s room just yet, it was dark, and I was scared, so I vowed to return during daylight.

Day 3, I had gathered my courage and was ready to go have a chat with Inez… alone.  Everyone but Paranormal Warehouse, had left the house for dinner, there was still a smidge of light left in the sky, and now was my chance to be alone with my new spirit friend… if that’s what you could call it.  So, up the steep stairs I climbed, down past the Captains room and through the bloody hallway leading to the end of the wing and Inez’s room. Inside Inez’s room, I shut the door.  Shut everyone else out, and sat on the floor staring at the closed closet door.  That closet really creeped me out!  I decided to move a little bit further away from it. As I sat there, I started having this feeling of wanting to play hopscotch.  The linoleum floor was patterned with squares that would be perfect for the child’s game, so that kind of made sense to me.  I took this as another sign of being in the presence of Inez’s spirit.  But because I still don’t trust myself in these things, I decided to FaceTime with my medium friend, and see if she could feel anything.

By bringing my friend into the room with me via FaceTime, I felt a little more courage, not as alone.  And we began to try and channel the spirit of Inez together.  She was with me… so I was told, and she wanted to make something clear, she DID NOT commit suicide, she was murdered.  Wow. Now, take it for what it is worth, but we definitely believed this “feeling” we were receiving, and I had a strange sense of calm and ease come over me; my fear had disappeared.  So now that I didn’t mind the inanimate dolls staring down at me with their glass eyes from the dressers above, I wanted to know more. With me, I had a pendulum, and my friend and I began a long conversation through “yes & no” questions with the spirit of Inez, trying to deduce what had truly happened to her.  “Did she kill herself?”  NO.  “Did she want to be crossed over?”  No.  “Did she know her murderer?”  YES!

After what seemed like an hour, we had finally come to the pertinent question, WHO killed Inez?  And that’s when everything changed! All of a sudden, I got cold.  My dog (who had been staying with my friend) started growling on the other end of the phone, and my friend, started to say something that I quickly cut off… “someone else is there too!” I curled into the corner of the room… my heart racing.  I was panicked.  The sunlight was starting to fade, tears were in my eyes, and there was NO WAY I was about to venture down the bloody hallway in the dark alone.  I felt trapped.  Frantically searching my phone for a flashlight, I heard a noise outside the closed bedroom door… and in walked the guys from Paranormal Warehouse!  Needless to say, I gathered up my things and had them escort me downstairs immediately.  WHAT had just happened?  That was intense.

Looking back now, what was it that was in Inez’s room?  What drew me to her?  What drew me to it?  What had I been hearing all along… was it the ghost of Inez trying to communicate with me?  Was it a different spirit playing a trick on me, trying to lure me away from “the pack;” which is known to happen at Malvern Manor?  I may never find out.  But one thing is for certain, whatever it was; it was REAL and I FELT IT!  At least now when I wear my “spiritual gangster” sweatshirt, I can say that I’ve earned it!

Now, to all those kiddos in my life wanting to play “pat-a-cake,” well, you’re just going to have to pick a new song!  Sorry!!  It will never be the same.  And to poor Inez, may you rest in peace; hopefully we’ll meet again.

Posted by ParanormalWarehouse.com on Friday, December 1, 2017

(Visited 423 times, 1 visits today)
Share this with your friends! 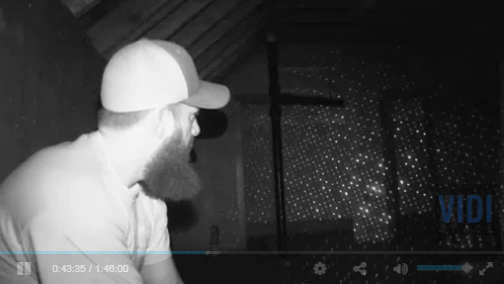 Horrifying Sounds From The Malvern Manor