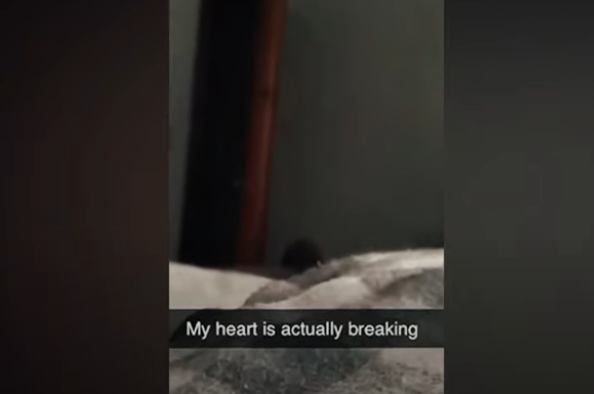 The miracle of birth can be an awe-inspiring thing. My daughter is going to be turning two this month, but I can still remember all of the small moments of her development. A moment that stands out to me as a father is when I first saw her move inside of my wife’s belly. This was the first time I was able to see her in some way and shape physically. Wanting to capture this same amazing moment, the soon to be mother captured more than she expected.

“The House Felt Heavy Like Someone Was Watching Her”

The video in question was posted on Reddit by a user claiming to be the woman’s brother. The woman was staying at his place alone with the company of his cat and dog. The video was initially posted onto Snapchat, and it was only until after the woman posted the video that she noticed the strange anomaly.

Before the video ends, what looks like a small figure pokes its head up from below the bed. The user commented on the video saying, “That was her last night in that house, and she didn’t have any other stuff happen. She was only there for a week and said the whole time the house felt heavy and like someone was watching her.”

Look Creepy… I’m Not Buying It

The video itself is creepy, especially with the thought of a defenseless pregnant woman being in a potentially horrifying situation, but I don’t think I’m buying it. Most people commented, saying it must be the cat or dog. You can hear the kitten “meowing” throughout the video, which would lend most people to lean in that direction. The user claims that it cannot be the animals since they are both white, but I think he is missing the obvious. While the animals are white, their shadows are not.

I think the most logical explanation for this anomaly is the shadow of the kitten against the wall. Shadows have a strange way of taking shape and can come across as creepy if put in the right situation. While it is always a bummer to debunk something, I am glad the pregnant woman is not being plagued by something from the unknown.

At the same time, what do I know? Let me know if you agree with me or if you think this truly is something paranormal in the comments below.