Recently, a freak incident took place in Draper, Utah, where more than 200 birds fell dead from the sky!  My first thought when hearing about this was that I am glad I was not there but my second thought was how?! 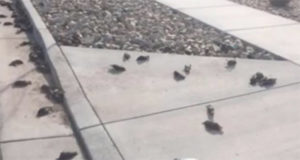 Many other’s have a different point of view.  According to some residents and conspiracy theorists, the birds were believed to be struck down in a UFO attack!  One conspiracy being discussed is that the birds actually flew into a “cloaked object”.

Sgt. Carpenter quickly shot down the idea of aliens and a UFO attack by saying, “No aliens, no cloaking device.  No poison, it was just one of those freak things where the birds were just flying along, crashing into the side of a large vehicle and boom.”

But was that large vehicle a UFO…?