Unless you live under a rock, you have heard the mysterious story of “The Black Dahlia”.  A New England native, Elizabeth Short, who moved to the bright lights of Los Angeles in the 1940s to chase her dreams of becoming a famous movies star.  Unfortunately, her dreams were cut short on January 15, 1947, when her 22-year-old naked body was found scrubbed, cut in half and drained of blood. 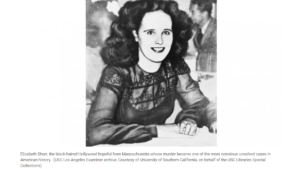 When Short’s body was discovered, it was obvious she had been viciously killed and her face was carved with a joker’s smile.  Soon after the news broke of this horrific murder, stories, theories and rumors began to fly around Hollywood.

A British lawyer, Piu Eatwell, believes she has solved the suspicious Hollywood murder mystery of “The Black Dahlia”.  Eatwell used legal documents from the case, including letters and grand jury testimony.  Eatwell also tracked down the last living people that were involved in the murder case at the time.

As a young new actress to Hollywood, it is believed that Elizabeth Short was very dependent on her friends, boyfriends and random people she knew for food and a place to stay for a night or two, according to Eatwell.

According to Eatwell, the alleged murderer is Leslie Dillion, who had entered Short’s life by her landlord Mark Hansen.  Eatwell also goes on to say that Hansen owned a number of movie theaters in Hollywood and was a multimillionaire.  He owned several rooming houses and had his own apartment on Hollywood Boulevard while also being separated from his wife and their two daughters. 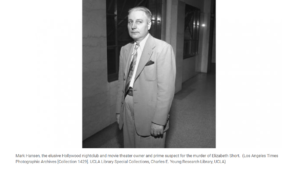 Short was just one of several girls who lived in Hansen’s apartment but he became increasingly obsessed with the young actress.  As time went on, Hansen became overly possessive of the actress and jealous of her boyfriends but also fed up with her actions, which included asking him for money.  According to Eatwell’s theory, eventually, Hansen was so tired of dealing with Short that his people to get rid of her.

Leslie Dillion worked for Hansen and had experience as a mortician’s assistant.  Eatwell’s theory claims Dillion is Short’s murderer.  Also, Eatwell claims there was a massive cover-up due to the fact that there are pages of documents missing and removed and always somehow connected to Leslie Dillion or Mark Hansen. 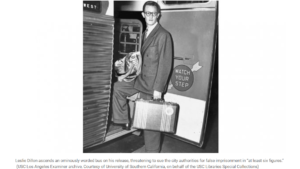 During her research, Eatwell discovered that Short’s shoes and purse were actually found dumped in a trash can two blocks from where Leslie Dillion lived!  The park where Short’s body was found was often frequented by Leslie Dillion, who often took a shortcut through there to get home.

At the time of the case, police confirmed that Leslie Dillion was considered murder suspect #1.  Dillion denied killing or knowing Short but was able to provide minute details of the murder.  Unfortunately, it was reported in The Los Angeles Times in 1949 that Dillion was released from jail to do the lack of evidence.  Dillion went on to live until 1988 at the age of 67.  Hansen died at the age of 74 in 1964 but remained on the police suspect list until his death but was never charged.