On November 19, 1995, there was a fire at Wem Town Hall in England.  The fire was so furious that the fire department had a hard time battling the blaze and the building burned to the ground.  During the fire though, a local citizen, Tony O’Rahilly decided to take some pictures during the blaze.  At the time, he did not realize he might have captured one of the best pieces of paranormal evidence…A ghostly image of a girl in the blaze.

According to authorities, there was no knowledge of a young girl at the scene of the fire and definitely not in the building itself.  Locals believed that the ghostly image was actually a young girl named Jane Churm, who started a fire at the town hall in 1677 that burned down several homes  and who also died in the fire. 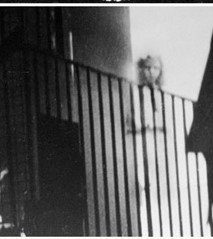 Although the picture is intriguing, many have come to believe it to be a hoax.  Brian Lear, 77, felt like he recognized the little girl in the picture from a postcard that was printed in the local newspaper.  The postcard shows a young girl standing in the doorway of a shop.  If you take both the picture from the fire in 1995 and the postcard, the images do seem to be very similar.  Tony O’Rahilly, who passed away in 2005 has always denied altering his photo from the 1995 fire and the ghostly image is now known as the “Wem Ghost”. 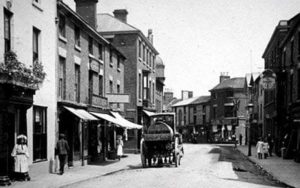 So what do you think?  Real or Fake?