We all want to figure out what these UFO’s are in the sky that people keep witnessing right?  Well, so does the Pentagon apparently.  According to the NY Post, the Pentagon sent up an “X-Files” type program to investigate the claims of military and commercial pilots who have reported UFO activity in the skies.  The program was called, The Advanced Aviation Threat Identification Program, fancy!

The program was set up in 2008 and continued to 2012 according to the NY Post.  During the this, it cost taxpayers around $22 million to run this program.  One of the reports that were investigated dealt with was an oval object the size of a commercial plane which was later chased by two Navy fighter jets off of San Diego in 2004.

There is no clear indication that this Advanced Aviation Threat Identification Program has actually found any proof of aliens from outer space visiting and landing on Earth.  Although, according to the Times, metal alloy material that had been recovered from apparent ariel phenomena is being kept in buildings in the Las Vegas area! 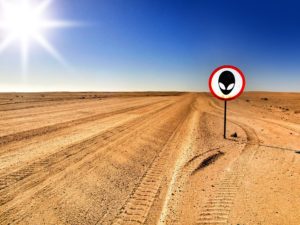 According to reports, researchers also investigated claims of alien abductions and those who may have experienced physical effects from encounters with UFOs.  The NY Post reports that the funding for the program ended five years ago.  But the employees who were assigned to the program originally, have moved on to other positions within the Pentagon but claim to still be investigating unexplained aircraft phenomena part-time.