More and more photos taken in historic locations are being claimed as ‘paranormal’ if there is the slightest anomaly, dust, orb etc that is shown in the photograph.  Note to all:  Not every little thing is paranormal!  With that being said, here is a classic example…

Gemma Surman was recently taking a tour of the 224-year-old heritage building in Gloucester Docks.  She was touring the prison and taking video and photos as any tourist does.

As you can see in the video, there were many people touring the prison at this time so it was not a regular paranormal investigation.  Therefore, there are a lot of factors you have to consider when claiming that you may have caught something paranormal.  The video clearly shows people walking around and basically having complete access to the prison.

Gemma Surman claims that while they were touring the prison she heard a door slam near a dark room and quickly she ran towards her family.  Interesting enough, in the Gloucester Prison pamphlet, it reads that there is a ghost who likes to slam doors in the prison…

Here is the photo that Mrs. Surman claims to have given her goosebumps… 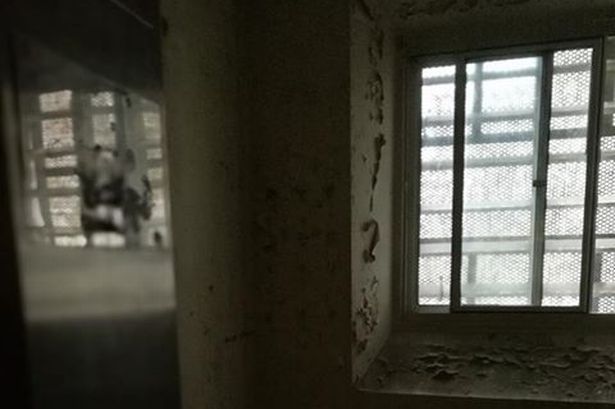 Unfortunately, in our own opinion, this is nothing more than a dirty old cell with a dirty old mirror.  Nothing about this says ‘ghostly figure’ to us.

Mrs. Surman was quoted in saying: “I took a few photos hoping for some weird stuff.

“When I first noticed the scary figure I had goosebumps.”

In our opinion, this is a classic case of your mind playing tricks on you.  Mrs. Surman wanted to experience something paranormal when visiting the prison so any little thing that happened was apparently paranormal, including the ‘ghostly figure’ in the mirror and the door apparently slamming in the prison.  She wanted a paranormal experience so bad that she tricked herself in believing she got just that while visiting the prison.