THIS STORY IS FEATURED ON EPISODE 119 OF THE ECTOPLASM SHOW

Its seems like every time I pop on the internet I am learning about some new mind blowing information relating to outer-space. This story is no exception. In June 2015 scientists received data the was unlike they have ever seen before. What the scientists found was an object so bright, that it breaks the laws of physics as we know them. In relation to Earth the object is three billion light-years away, and produces more energy than one hundred billion of our stars. In comparison to our entire Milky Way galaxy, the object outshine it by fifty times. To add the cherry on top, scientists believe that at the center of this light is an object no larger than 10 miles across. This is an unbelievably small object to be generating a physics shattering amount of light. 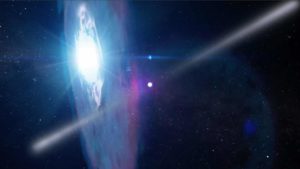 Through the use of a telescope that is able to measure light radiation, scientists at Ohio State have given this anomaly the name ASSASSN-15lh. After further research, a few ideas of what this thing was began to emerge. One idea is that the light is being emitted by a super nova. Although this is entirely possible, if true this would be the most powerful supernova ever witnessed. Another idea is that the object is a magentar, which is a rare super dense star. Although there are many theories, the energy being produced by this object shatters any previous knowledge of what we thought was possible. The Hubble telescope is currently waiting to save the day and focus in on this unbelievable anomaly. We can hope that through the Hubble we will be able to finally have the information to determine what this thing is.