APP IS FOR ENTERTAINMENT PURPOSES

I can understand why the idea of a phone app that can be utilized to contact the dead would sound appealing. The number of people who have downloaded apps such as the “Ghost Radar” or “Ghost Detector”have been downloaded thousands of times displaying their popularity. This large group ranges from kids trying to “freak each other out” at sleepovers to actual paranormal investigators which is in my opinion unfortunate.

Before I get to the “unfortunate part” of this story let me reiterate that I understand why people would use these apps. First the idea of whipping out your phone and wham bam you have an operating ghost detector sounds awesome. With people being soul bonded with their phones these days I am not surprised that paranormal research has crept its way into the app store. Second the price of some “paranormal equipment” can reach hundreds of dollars. Having no real understanding of how these pieces of equipment actually work many paranormal investigators are more than willing to fork over a paycheck for the new piece of technology they see on television. Having a cheaper and more convenient alternative to the plethora of overpriced “tech” flooding the market, choosing to download the app is a no brainier. I would agree if it weren’t for these five words, “APP IS FOR ENTERTAINMENT PURPOSES”. 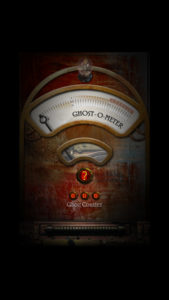 I could go into the technical impossibilities most of these apps state they can perform, but the words “app is for entertainment purposes” saves me a lot of time and grief. These words in some form can be found at the bottom of the description of each and every paranormal investigation related app. This statement is saying that these apps are simply toys. They were created to get a rise out of their users while they walked through the a cemetery or whatever… Listen we aren’t here to burst anyone’s bubble here, but being an organization that promotes improved performance of paranormal research, I feel obligated to spread the word to simply stop people from wasting their money and time. For more detailed information on these apps check out this awesome episode of I Am Kenny Biddle!