In my life, I have had several paranormal experiences starting as your child all the way up to adulthood. I’ve heard my name being called by a disembodied voice. I’ve been touched, I’ve seen glasses being tossed to the ground, and more. One event, however, stands above the rest in my mind. I grew up traveling with a carnival. It was an interesting childhood, to say the least. When I close my eyes I can see the fluorescent lights of the rides and games. I can still smell the enticing aroma of the funnel cake in the air. Also, now and then I get a craving for a real fair corn dog. Not the frozen ones you can buy in the store. It’s not the same. To me the carnival is the prettiest at twilight; when the sun rays are golden pink in the sky and the matching lights on the rides and games seem to shine brightly along with the sun. This is the scene of one of the most memorable and mysterious experiences of my life.

This was a very busy night for the carnies working. People were crowding the midway everywhere you looked. My mother had stopped to talk to someone. I held onto her hand and waited patiently for us to move on. As I waited I watched all the people run this way and that way. Teenagers looking for the biggest rides to go on. Parents carrying all their prizes and candy as their kids worked on their ever-growing sugar rush. I’m not sure how long I stood there just people watching. Five minutes maybe? Like I said, I’m really not too sure now. Anyways, for some reason a woman and a young boy caught my attention. The woman was tall and slender and she was holding the hand of a little boy. They had nothing in their hands. No food, candy, prizes, or ride tickets. I don’t even remember seeing the woman with a purse or bag. That was not the strangest things about them though. What caught me off guard was the fact that even though they were walking right in front of me. So close that I could reach out and touch the boy. Despite this and the fact that they were walking under some bright lights, they seemed distorted. I couldn’t make out any distinct features. It was like they were blurry silhouettes of two people. 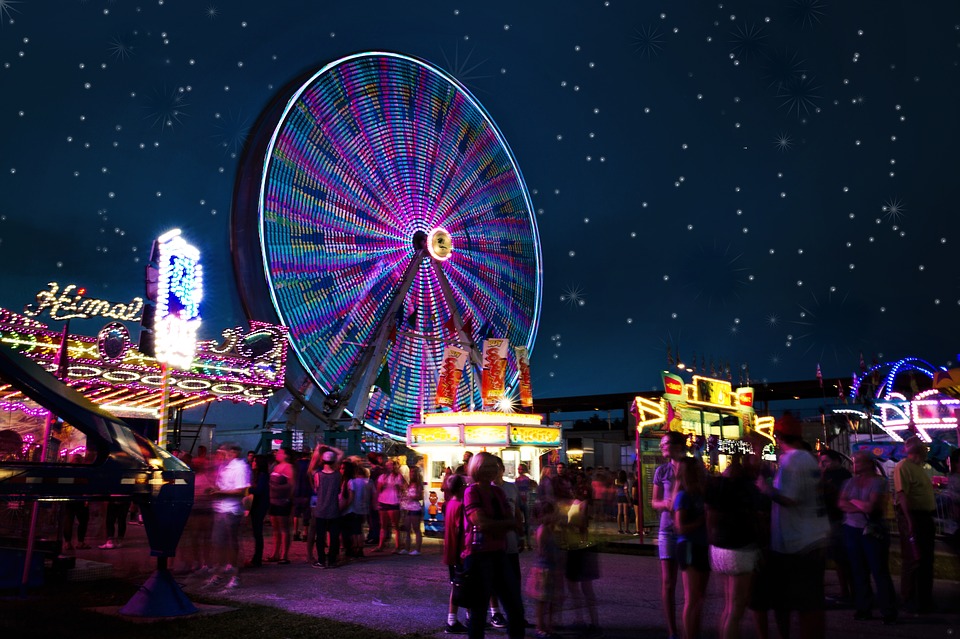 They walked passed me and seemed to not even notice me watching them. I turned my head to continue to watch them walk away. In my young mind, I really wasn’t why I was watching them so intently. Why I was so fascinated by them.The woman and boy walked about ten feet or so away from me and the atmosphere changed. The sounds of the midway stopped. I could not hear talking, scream, the loud sound of the rides, or the beckoning calls of the Barkers. The smells of the food were gone as well. The strangest thing of all, however, was the fact that the midway seemed to be frozen in time. Including me. I didn’t (or couldn’t) move my body at all. Honestly, I don’t think I tried to move. Even the odd woman and boy seemed to be planted in place, still hand in hand. Suddenly the boy did make a move. He turned his whole body to the left but still seemed to keep a hold of the woman’s hand with his own right hand. Why did he turn around? Well to look directly at me of course.

When he turned to look at me I finally got see what he looked like. He had a pale complexion with short brown hair. His frame was thin and he seemed to have long arms and legs. He looked to be about seven or eight. Close to my age. He was taller than me, but I’ve always been short so most people are taller than me. What is most engrained in my memory of him was the fact that he did not have eyes at all. There was skin over his eye sockets. He was close enough to for me to see the blue veins under the skin of where his eyes should be. His face was expressionless and he did not make a sound. He just stared at me. The woman that he was with did not make a move either. I never got to see what she looked like.

As the boy stood there staring at me I remember not really being afraid that feeling in shock. I was shocked because I knew that this boy and I were examining each other intently but I couldn’t understand how he could make this eye contact with me without him having eyes at all.I knew in my mind that he was keenly aware and interested in me. I’m not sure how much time passed. It couldn’t have been more than a minute or two. Who knows though. As I mentioned before; time seemed to have stopped. The boy then turned back around and disappeared into the crowd. Everything went back to normal. The sounds and smells were back to normal. I jumped and turned to my mother. “Mom, that boy looked at me and he didn’t have any eyes,” is what I said to her. I know that really didn’t explain what had just happened but it was the best I could come up with. I was young and at the time really didn’t understand what I had just experienced. To this day I really don’t know what had happened. I’ve asked various gifted people throughout the years and have yet to be given a clear answer.

My poor mother was at a loss as to what to tell me. I’ve had little experiences in the past with such things and she had always believed me. To this day she remembers that night and what I had told her. She did not have that experience but she says she can clearly see in her mind the look of confusion on my face and the shock in my voice. Not to mention my sudden outburst of what I had seen. It was not my normal behavior to interrupt adults talking and had calm and quiet the whole time we stood there. Wow, I was such a good kid. So, did not hesitate to believe that I did see something out of the ordinary. The only thing she could think to say to me at the time; “Are they hurting you? Are the scaring you? I answered negatively to both questions. She then continued to say; “You leave them alone and they will leave you alone.” Sound advice really, though I don’t follow it too much. I’ve never had a truly negative or terrifying paranormal experience so far.

I still continue to research and ask those who are more knowledgeable than I am as to what it is I saw that night. I’m unsure to say it was a ghost of any kind because he was corporal and seemed to be made up of skin, blood, and bone. I may never fully understand what I had experienced. This world is a strange one and there are still mysteries to uncovered.

(Visited 895 times, 2 visits today)
Share this with your friends!