A man named Jeff Wallace, 43, spotted something strange in the skies while picking up his stepdaughter on St. Patricks Day. Being intrigued by the bizarre light formation Jeff pulled his car over and began taking pictures of the strange anomaly. 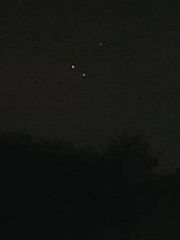 The alleged UFO can be described as a set of three lights organized in a triangle pattern. These types of sighting have been reported multiple times around the world, all with the same triangular positioning as shown in Jeff’s Photos. 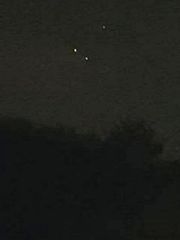 The Military Has No Idea

Jeff Wallace was not the only person who saw the lights. A large number of New Jersey residents viewed the lights promting people to send the photos to a local air force base. Air Force Staff Sgt. Lauren Russel commented stating “There’s not enough from the photos we weren’t able to tell.”