Viral Video Claims To Have Captured Corpse Waving In Casket 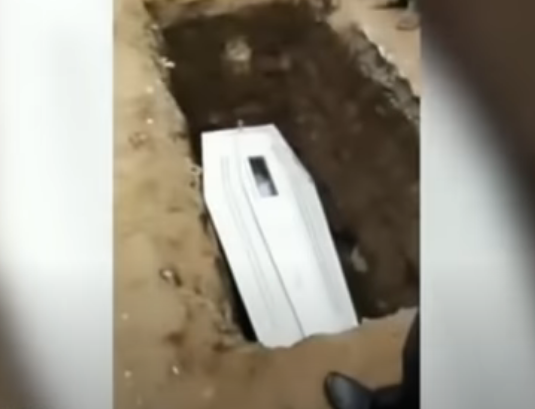 A video filmed in Manado City Indonesia shows what seems to be a corpse waving to its loved ones before being buried. Even though multiple loved ones attended the funeral, no one at the time noticed the movement through the coffin window.

This video was quickly blowing up over the internet, and to be honest, before watching, I expected typical hoaxed trash. That being said, after finally getting to watching the video, I was surprised how convincing the video truly was. Convincing or not I was interested to see what the internet had to say about this phenomenon.

After doing some research, the most common theory was that the person was buried alive. The idea of this is clearly horrifying, but with today’s burial methods, coroners and doctors have multiple ways to ensure that a person is actually dead. Long past are the days when a person was buried with a string attached to a bell “just in case.”

Other people are jumping on the paranormal train claiming that the hand is not actually the hand of a corpse, but one from the ghost of the deceased. While I guess there is no real way to disprove this theory, I still had to look for a more believable explanation.

A more logical theory is that the body was going through some sort of stage of rigor mortis in which the muscles of the deceased seize up. In my opinion, the video is either capturing a physical phenomenon, or it is simply doctored through editing.

With the deceased at rest, we will never truly know what happened, but we want to see what you have to think of this video. Was this video evidence of the paranormal, a natural phenomenon, or a straight-up hoax. Let us know in the comments below.