WE ARE GOING LIVE! REAL OR FAKE STYLE!

If you have been following Paranormal Warehouse from the beginning, you know we have several different Youtube series that we tried out.  “Paranormal News”, “Paranormal History”, “Viral Paranormal” but our most popular thanks to you guys, has always been “Real or Fake”!

We started “Real or Fake” back from when Paranormal Warehouse first started and currently we are up to over 30 episodes!  We never thought it would continue this long and it was with the help of our fan base!  We appreciate all the comments and constructive criticism that adds to the show!

With that being said, we have some big news…We are going LIVE with “Real or Fake”!  VIDI.space and TheHaunted.space is giving us the opportunity to bring you “Real or Fake” LIVE for FREE!  How awesome is that?!

Here is what you have to do to tune-in… Head over to TheHaunted.Space and look for “Real or Fake” by Paranormal Warehouse.  The first show will start at 8pm EST on April 12th and will continue every other Thursday!  “Real or Fake” is also interactive so we want to see and talk about your comments on the videos we showcase and want to know whether you think it is REAL or FAKE! 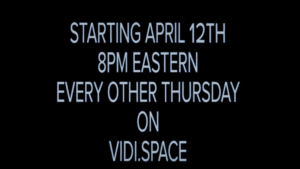