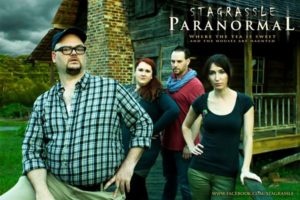 Being involved in paranormal research the tone can predictably be grim. The constant reminder of looming death not only drives me to learn more about the afterlife, it also promotes regular panic attacks due to the inevitability of my body turning into worm food. It is this grim fact that makes me truly appreciate when someone brings a glimmer of light to the paranormal field. I had the joy of recently discovering one of these glimmers in a hilarious paranormal television parody. I would like to welcome everyone to Stagrassle Paranormal! 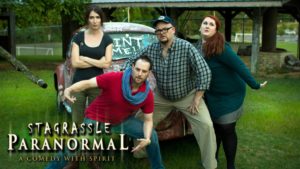 Stagrassle Paranormal is a mockumentary style comedy series chronicling the adventures of both a rural ghost hunting team and the filmmaker following them. The main cast features Glenn Payne (Larry), Casey Dillard (Penny), Chris Counts (The Colonel), Lee Crouse (Enzo), and Casey Heflin (Bernice). For more info on the crew click THIS ARTICLE. Each character has their own unique quirks, leading to hilarious character interaction. The laughs hit hard and often which makes the show an overall awesome experience. You can check out the very first episode of Stagrassle Paranormal HERE on Amazon.com.