When Your Imaginary Friend Is Really A Ghost!

Most of us growing up always had an imaginary friend that “followed” us around and that we played with right?  Many of us didn’t think it was strange or anything and that it was a part of being a kid and growing up.  When the imaginary friend starts to get personal and very detailed for a child, that is when it becomes a little bit creepy…

Recently, in an issue of Oh Comely Magazine, Ruby, a three-year-old had shared her drawing of her imaginary friend.  How cute!  Ruby also described her friend in about five sentences so everyone can understand what her imaginary friend is all about.

This is where it gets creepy… 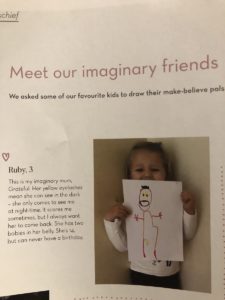 Here is her description:  “This is my imaginary mum, Grateful.  Her yellow eyelashes mean she can see in the dark- she only comes to see me at night-time.  It scares me sometimes, but I always want her to come back.  She has two babies in her belly.  She’s 14 but can not have a birthday.”

After this story was posted to Twitter, social media followers were concerned and telling Ruby, um we think you have a ghost girl!

According to Bustle.com, there is a video that will be coming out later with an interview with Ruby.  Ruby confirms that Grateful “can have no birthdays, only nothing.  Nothing.”  Ruby goes on to say that Grateful “lights up in the dark normally.”  Ruby also says that Grateful whispers to her by saying “Ruby, Ruby.”

Honestly, this whole thing is a bit creepy.  Is it a ghost or just an overactive imagination by Ruby?  Either way, it is pretty interesting and we will keep on top of this to see if there are any other developments about Grateful…

Mercado, Mia. “This 3-Year-Old Girl’s Imaginary Friend Is So Nightmare-Ish That All Of Twitter Is Crying.” Bustle, Bustle, 31 May 2018, www.bustle.com/p/this-three-year-old-girls-imaginary-friend-is-so-nightmare-ish-that-all-of-twitter-is-crying-9257122.
(Visited 491 times, 1 visits today)
Share this with your friends!