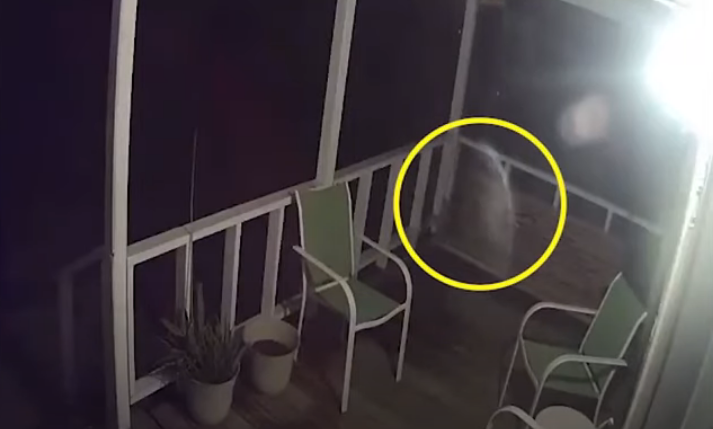 The loss of a parent is a sadness that one cannot easily shake. Having experienced the loss of my father from a young age, I still have frequent feelings of loss and missing him on the regular. A woman, Norma Villa, who is was caring for her terminally ill mother who recently passed claims to have been given some peace by a visit from her passed father.

“That Was His Favorite Spot Right There”

Norma posted a video to the internet which she captured on her security camera. After reflecting on her difficult situation she received an alert from her security system which displayed the video in question. The video clearly shows what looks to be a ghostly figure “swooping” into the frame and sitting on a porch swing.

Norma had the following to say about the video: “I believe this could be the ghost of my dad.

“I felt at peace when I saw the video. The first thing that came to my mind was my dad – I instantly knew it was him.

“I kept watching the video and he always sat in that spot and always sat outside to smoke. That was his favorite spot right there.

“It brings me comfort to think it was my dad watching over us both. I think he was there to reassure me.

“My mom had been diagnosed with cancer in September and they gave her less than six months to live – she was already halfway there.

“That night she was really sick and we were talking about a hospice already because she was unable to walk anymore.

“I went to my room and I had a moment. I needed to just let everything out and I started talking to my dad.

“I was actually comforted by it by talking to him – I just felt better. As I’m laying there my notification on my phone went off that something was on the porch.

“I have a security camera and it gives off a notification when there’s something around.

” I expected it to be a cat or something of an animal type, but it was actually that.

“I kept rewinding it and I was like ‘what is that?’

“I showed my mom and the first thing she said was ‘they’re coming for me’. She wasn’t scared, she wasn’t hallucinating at the time.

“I didn’t ask her what she meant – I just said ‘please don’t talk like that’. She just smiled.

“I can see the resemblance when I pause the video but I really don’t know. I wish somebody could tell me.

“He’s leaning in the same way. I honest to God think it was my dad.”

Family Are Convinced They Captured A Ghost In Their Family PHoto